Here we are.  I figured this would happen sooner or later.  Honestly, I feel somewhat relieved to have it in the past, knowing that the US strike was either a failure, mere theatrics, or some combination of the two.

According to the pentagon, they struck three targets, one in Damascus and two in Homs, all related to the manufacture and distribution of chemical weapons, and all missiles struck their targets.  According to the Syrian Arab Army, they intercepted 71 of 103 missiles.  So someone is lying.  Here is a video of at least one missile being shot down.  So we can safely say that doubt has been cast on the American claim.  There were strangely no fatalities and the only injuries reported were three civilians in Damascus and six military personnel in Homs.  It stands to reason that there would be at least a couple of security guards at these important weapons sites, but apparently not.  It is possible that they were evacuated after the locations were provided to the SAA by the Russians, but, as far as I know, the pentagon maintains that it only alerted Russia as to what air space it would be using and didn’t give specific locations.  The site in Damascus was actually a random university, and the three injuries happened in an apartment complex near by after one missile missed its target.  The SAA also claims that 13 missiles were directed at a completely different site in Damascus, possibly the airport, but they were all intercepted.

Now, lets take a look at our good friends the “moderate rebels”on whose behalf we intervened.  The group that until recently occupied Douma, where the alleged chemical attack took place, are called Jaish-al-Islam (The Army of Islam).  They were founded in 2011 and are almost entirely supported by Saudi money, which should come as no surprise if you are following along. (See Biggest State Sponsor of Terrorism: Iran or Saudi Arabia?)  Naturally, they are Wahhabi, and their goal is to implement a caliphate in adherence to Sharia law.  They are known for taking hostages and using human shields. Their victims come primarily from the Alawite, Christian, and Druze communities as well as family members of SAA soldiers in and around Eastern Gouta.  They made international headlines starting in 2012 by kidnapping more than 4,000 civilians.  To-date, they have only released about 200.  The rest are presumed dead, because they certainly didn’t take them all to Idlib.  Women and children were usually placed in cages and driven around town in the back of trucks and, more than likely, raped. 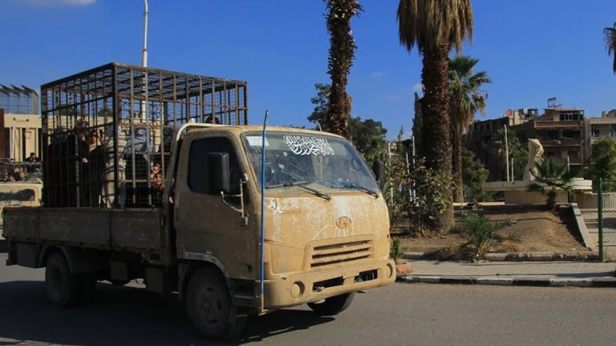 While men typically get the bullet.

When the army liberated other towns in Eastern Gouta they found stockpiles of chemical weapons.

Independent UN observers found in 2013 that an attack in the same area was carried out by rebel forces.

Evidence for the latest attack was provided by the White Helmets, while the Red Crescent says they found no evidence of a chemical weapons attack.  The White Helmets have been linked to Al Qaeda.  Their headquarters in Aleppo was found to be next door to Al-Nusra’s.  They post pictures on their own social media sites of themselves with ISIS and Al-Nusra members.  In ISIS’s own videos, the White Helmets can be seen removing the bodies just seconds after executions.  They operate only in rebel-held areas.

The White helmets have been thoroughly exposed by journalists like Vanessa Beeley and John Pilger.  For a quick and digestible video on this subject, I refer you to the brilliant work of James Corbett.

At the time of the missile strike early Saturday morning, the Army of Islam and their White Helmet allies had already evacuated by bus to Idlib province.  The residents cheered as the city was liberated and they could, for the first time in years, return to some form of normality.  Take a good look at this picture.  These are people who have been liberated from the ‘moderate rebels'(terrorists) by the ‘animal Assad.’ 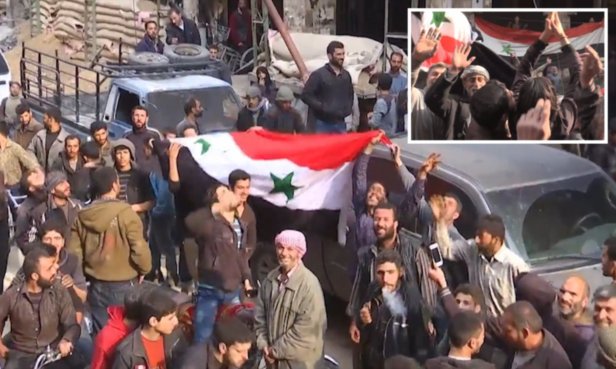 It’s almost as if these people support their ‘animal’ president.  Celebrations are a common theme as the war winds down.  Type ‘liberation of Aleppo’ into YouTube and see what comes up.  Even the main propaganda outlets in the US were showing footage of people in Damascus waving Syrian flags and celebrating the West’s failed attack.  I wonder how the TV-watching masses in America can reconcile these images with the propaganda they are force fed every day.

RT interviewed an ER doctor from the central hospital in Douma where that now famous White Helmets video was filmed.  The video shows people being hosed down and given inhalers.  The doctor, who can be clearly seen in the White Helmets video, said they were treating patients for smoke inhalation when an unknown man entered the room and said the people had been exposed to deadly chemical gasses.  Many people must have expected the man to be a terrorist agitator, because a fight broke out.  But to be on the safe side, they hosed the patients down.  The doctor said there was no evidence of a chemical attack, and all patients, suffering from respiratory problems from smoke inhalation, made a quick recovery.

The only evidence of deaths we’ve been given are images of a pile of dead bodies in what looks like a very small room.

These could easily be kidnapped victims of the Army of Islam.  Nothing can be known for certain, so any reasonable person would be calling for an investigation.  The fact that the West bombed the day before the independent OPCW investigation was to begin, and they are demonizing anyone who questions the official narrative as a ‘conspiracy theorist’ is very telling, and it only makes them look more guilty.

Russia has come out and said that they have proof this was a false flag initiated by the UK.  They say the same thing about the Skripal case.  I haven’t seen the proof yet, but I’m very intrigued.  Of course, it could just be like France’s ‘proof’ which turned out to be the images everyone had already seen and the testimony of White Helmets and other terrorists.

I’ve been closely monitoring social media to gauge public opinion, and people my conclusion is that people are beginning to catch on.  According to an ABC/ Washington Post poll only 51% of Americans supported the strike, and a poll in the UK revealed that a shockingly low 22% supported it.  An increasing amount of people can see this for the false flag that it almost certainly was.  Many more believe Assad did it but still appose airstrikes on the grounds that Assad is the lesser evil when compared to the terrorists.  Still others are sick of wasting all our money on foreign interventions as our countries go deeper into debt and our infrastructure crumbles.  Either way, I think we may be about to reach a tipping point where the imperialists, war profiteers, and Zionists won’t be able to get away with this anymore.

Interestingly, in a reversal of what we saw during the Iraq invasion, the right in America seems to be more anti-interventionist than the left.  As far as I know, there were only two people in the MSM who pushed back against the narrative: Tucker Carlson and Tomi Lahren, both Fox News contributors.  The so-called left-wing media, like MSNBC, CNN, network nightly news, New York Times etc, were all beating the drums for war.  This a development that I did not see coming.  But I guess when you are forced to support a war criminal like Hillary Clinton, this is what you get.  I’ve been reading YouTube comments and looking at like-to-dislike ratios, and the right seems to be the most skeptical.  This is particularly true with millennials.  Even Ben Shapiro (an online Zionist talking head, geared towards millennials) was shredded by his audience of usually, almost cultishly, loyal young people for spreading the Israeli agenda.

There are also a lot of Trump-supporting idiots out there who think this was a ‘surgical’ strike.  To this I say, do you have any idea how powerful a Tomahawk missile explosion is.  There were more than a hundred of those.  Think before you open your mouth.  If they really hit these important sites, do you think there would be no personnel around at all?  There would be more than nine injuries.  Obviously most of these missiles didn’t hit the ground, and the ones that did hit empty warehouses and the like.

And of course the ‘resistance’ on the left are saying he didn’t go far enough.  Do any democrats actually think this is how you’re going to win in November?

So what next?  I think the big question to ask is ‘what was the purpose of this attack?’  It seems to any rational observer to be a failure.  But was it designed to be so?  Or was the US trying to hit other sites like the Damascus airport?  Some have speculated that the Trump Administration was trying to distract from domestic issues.  Others have said they were trying to make the upcoming UN investigation more difficult.  Maybe they were just testing the waters first to see if people would go along with it.  I sincerely hope it is something like this, and that the West isn’t intending to seriously weaken the Syrian government.

Honestly, for me, the most disturbing revelation from all this is the total absence of an anti-war left in America.  They’ll run around hysterically in vagina hats, complaining about mythical gender inequality, but when it comes to saving the lives of people in Syria they’re nowhere to be found.  Where is Antifa on this?  I guess BLM doesn’t care about brown lives.  I mean I know you all went to sleep when there was a Democrat in the White House, but you’re supposed to pretend to care about war when the Republicans are in power, remember?  Like during the Bush administration?

I don’t understand how anyone can not be skeptical at this point.  After Iraqi weapons of mass destruction, Golf of Tonkin, babies in incubators, every war in memory has been started on lies.  I remember a few years ago, everyone pretended to care about the Libyans.  Now no one cares about them.  It’s a failed state with slavery.  If we really cared about the killing of innocent civilians, we would bomb Saudi Arabia for the genocide they are currently carrying out in Yemen.  But we don’t care about innocent civilians, and, at this point, if you still think we do, you are willfully ignorant.

Anyways, it could have been so much worse.  Russia held back and let the SAA take care of themselves.  But the West is seriously playing with fire here.  Can you imagine being a Syrian?  They finally almost defeated the terrorist and here comes America.  I pray that this nightmare in Syria is almost over.

2 thoughts on “The Recent Events in Syria”