There are two stories I heard about this week that are so relevant to the public discourse, it’s criminal negligence that they are not on the front page, but instead you would have to dig through headlines for hours to find any peep about them.  If there is any doubt in your mind that the mainstream American media is government controlled, this should dispel it.

You may recall a couple months ago, 13 Russian Twitter trolls were indicted by the FBI for sharing information or something.  (See Russiagate)  I, like most thinking people, understand that this was just a propaganda ploy.  Obviously, Mueller’s office didn’t expect any of the defendants to show up for their arraignments.  After all, they are all in Russia, and there is no extradition treaty in place.  In a hilarious plot twist, one of the companies indicted, Concord Management and Consulting, decided to call Mueller’s bluff.  They pleaded not guilty in a US court last Wednesday.  You think Mueller and MSNBC and everyone else would be ecstatic over this.  The information that they’ve compiled over the course of the year-and-a-half investigation will get to see the court room, and all the families of America will be talking about it over dinner.  But that’s not what happened.  Mueller’s office tried to cancel the arraignment because the St. Petersberg- based marketing and catering company had not been “properly served.” The reason for serving someone is to inform them that they need to appear in court, but the company apparently got the message because they showed up in court, so the judge saw this absurd insult to our intelligence for what it was.  They are scheduled to meet in court tomorrow, May 16th.  The MSM, aside from RT, and maybe Tucker Carlson and page 20 of the NYT, will not cover this very important trial, but I’ll be paying attention.

If you still believe Russia meddled in our elections in any substantial way than there is no hope for you.  You have surrendered your critical thinking ability.

You also may recall that a few weeks ago the US bombed what they claimed to be a chemical weapons facility, but actually turned out to be the Barzeh pharmaceutical research facility.  ( See The Recent Events in Syria and An Update on Syria)  Well, The Organization for the Prohibition on Chemical Weapons (OPCW) inspected the site and found no trace of chemical weapons.  This proves beyond a shadow of a doubt that the US, UK, and France launched an offensive attack on a UN member state under false pretenses. The absolute best case scenario is that they launched this attack due to faulty intelligence, in which case they should still be held accountable because the OPCW was in Damascus at the time, and they could have waited until the investigation was finished. But of course the reality is that they knew there were no chemical weapons.  And don’t forget they did this without congressional or parliamentary approval. Trump is a war criminal.  So I guess the impeachment proceeding will be starting any day, right? No?  Well at least the left-wing ‘Resistance’ is hammering him hard for this, right?  Nope.  Again not a peep.  The silence is deafening.  It was talked about only in Russian, Chinese, and alternative media.

Furthermore, have even thought about what it would mean if there were chemical weapons in that facility?  It is located in a densely populated suburb of Damascus.  If there was Sarin there, it would have been released into the area, putting many civilians in danger.  But everyone knew there were none.  That’s why people can be seen walking around the smoldering rubble without even gas masks.  In this picture you can clearly see a dense neighborhood of apartments in the background. 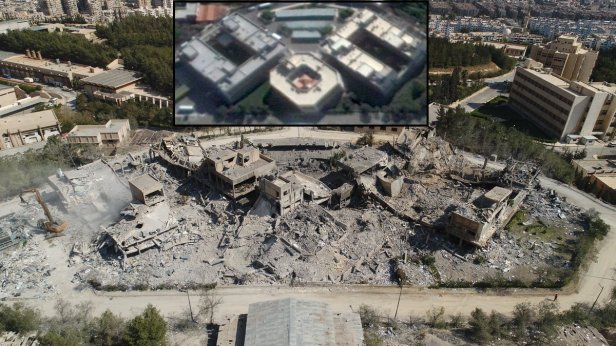 And where were the White Helmets with their $32 million is US funding during all this?  Surely they were in the area to help out the innocent people after these bombings.  Or perhaps they stayed back in Douma where they would surely be needed after the evil dictator Assad took over.  Nope.  They escaped to Idlib with the terrorists, as all good neutral humanitarian aid workers do.

The Russiagate psyop has been so effective that what passes for the left in America will not stand up for the people of Syria, because they are on the side of the evil Russians.  At first, I was confused by why Democrats were more in favor of the airstrikes than Republicans.  But now I get it.  The brains of the American left have been so thoroughly washed that they’ve thrown all their anti-interventionist principals out the window, because they now see the world as some type of binary, cold war tug of war.  I have liberal friends that are actually falling for this nonsense and are on the fence about Syria.  It’s so frustrating it makes me want to pull my hair out.

Anyways, it’s not so much that I enjoy writing about this, but I feel obligated to, because almost no one else will.  I know very few people read my blog, but if I can influence at least one person, if I can inspire them to think for themselves, maybe they’ll nudge a friend or two on the path towards truth, and I will have served some purpose in this world.  Hello, one person, whoever you are.