I’m going to redefine the Middle East as The Levant, The Arabian Peninsula, The Gulf States, Iraq and Iran.  I’m not going to get into North Africa, Cyprus, Afghanistan or Turkey, because that’s a bit much to cover.  I have to draw the line somewhere. And, lets face it, only in the dumbed-down American media is Afghanistan considered the Middle East.

I’m going to go country-to-country and language-family-to-language-family similar to how I did in Ethnicities of Indochina.  This is a part of the world that most Westerners are remarkably ignorant of.  As I mentioned in The Ideal Representative Democracy, the more people know about a place, the less they tend to want to bomb it.  Knowledge is the enemy of empires.  Ignorance is their friend.  So lets get started.

Arab, as most know, is the ethno-linguistic group most associated with the Middle East, but it is inaccurate to think of all Arabs as a single group.  The Arab world is characterized by diglossia, meaning there is a standard form and many non-mutually-intelligible vernacular forms of the language.  Arabic speakers generally speak two dialects: Modern Standard Arabic and their regional dialect.  Here’s a map of regional dialects.

So the Arab Middle East we’re referring two can largely be split up into two groups: The Gulf/ Saudi to the south and The Levant/ Iraqi to the north.  In addition to these two there in a North Mesopotamian Arabic spoken by the Arabs of Kurdistan (including Mosul).

The Levant is largely split up on arbitrary lines.  Here’s a map of The Levant from Ottoman times.

As you can see, the Ottomans split it up much differently than what we see today.  The province of Beirut contained much of modern-day northern Israel, extending all the way up the coast to encompass the entire Syrian coast, including Latakia.  Aleppo Province contained much of the Kurdish part of Turkey, while Syria Province was a vast expanse containing most of modern day Jordan and even the southern tip of Israel.

According to British mandatory estimates the percentage of Palestinians who were Christian in 1922 was 10.8%.  Most Christians have fled the Jewish occupation, and the current Christian community in Palestine is around 2%.  Christians make up 40.5% of the population of Lebanon and an estimated 10% of the Syrian population.  I wonder if Christians Zionists in the West are aware of these stats.

Jordan was sparsely populated in Ottoman times but has seen an influx of Palestinian and, more recently, Syrian refugees.  Palestinians are said to make up a slight majority of the population now.

The current population of Palestine is about 4.75 million, although many Palestinians have become Israeli citizens and are usually referred to as Arab Israelis.  The population of Israel is about 20% Arab, making Arabs the majority in Israel-Palestine.  The Israeli government is trying to increase Jewish immigration to remedy this demographic conundrum.  A strong majority of Palestinians and Jordanians are Sunni.

Some of the more interesting and misunderstood groups in the region are the smaller ethno-religious groups like the Druze, Yazidis and Assyrians.

The Druze number about 800,000 to 1 million and consider themselves a branch of Islam, but are viewed by many Sunni fundamentalists as infidels.  They have strict rules against marrying outside the faith, and they believe in reincarnation.  Scholars can’t agree on how to classify the religion, with some placing it outside Islam.  Druze speak the Arabic dialects of their respective home countries.

The Assyrian people number 2-4 million mostly in Syria and Iraq but with a significant diaspora in other places like the US.  They are Christians and are some of the last remaining speakers of Aramaic (the language of Jesus Christ).  They have been one of the most persecuted groups by Islamists including US allies.  You would think Western Christians would rally behind this group, but don’t underestimate the power of propaganda and ignorance.

The Yazidi people are a subgroup of Kurds who number close to a million.  They live primarily in Iraqi Kurdistan.  They have their own monotheistic religion, but are considered by many Sunnis to be Satanic.  Naturaly, they have been a major target of the Islamic State who love to take fare-skinned Yazidi women (pictured below) as sex slaves.

The Yarzani people are a similar group but are largely in Iran, safe from the Islamic State.  Shabakism is another religion practiced by Kurds, especially around Mosul, but, like the Druze, they consider themselves Muslim, though hard-line Sunnis beg to differ.  A small number of Kurds also practice Zoroastrianism, a pre-Islamic, Persian, monotheistic faith.  The majority of Kurds are Sunni.

Iraq, linguistically, is Arab majority, and, religiously, is Shia majority.  The religious demographic break down as 65% Shia, 20% Sunni, 6% Christian, 3% Yazidism, 2% Shabakism, and .6% Zoroastrianism.  The linguistic make up is around 75% Arabic, 20% Kurdish, and 5% other (mostly Turkmen and neo-Aramaic)

Two of Shia Islam’s holiest sites, Najaf and Karbala, are in Iraq.  Iranian pilgrims visit these sites in mass every year.  Because of it’s Shia majority, Iraqis have a more favorable view of Iran than other Arab countries.  Sadam was a Sunni.  Though officially his government was secular, many claimed that he suppressed the Shia majority.  In the 80s, his army invaded Iran over paranoia that it was influencing a Shia revolt.  Since his death and the rise to power of Arab Shiites, many Baathist (Sadam allied) military leaders have joined the Islamic State.

Kurdish is part of the Iranian branch of Indo-European languages.  These languages are more similar to English than they are to Arabic.  Here is a map of Iranian languages. 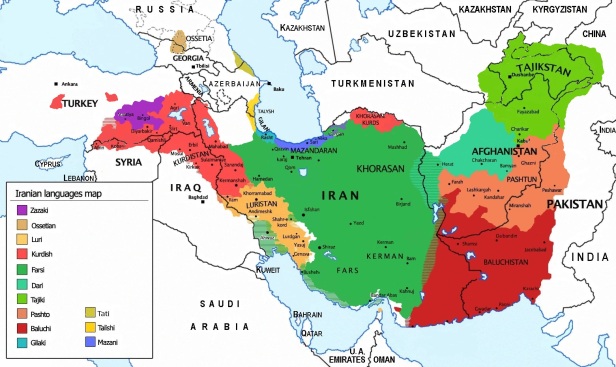 Persian, with its three mutually intelligible dialects: Farsi, Dari, and Tajiki, is the official language of Iran, Afghanistan and Tajikistan.  Kurdish is less standardized and has three dialects that are not quite mutually intelligible.  Kurds are not a unified people group but a dialectal continuum.  They are, on average, more secular and liberal than their Arab and Persian neighbors.  Kurds have contentious relationships with the dominant ethnicities of Syria, Iraq and Turkey, but, as far as I can tell, get along alright in Iran.  Kurds and Persians have very similar cultures.  Most Iranian Kurds tend to view themselves as Iranian first and Kurdish second.  This cannot be said for the other three counties of Kurdistan.  Kurds in Iraq and Syria have de facto  autonomy and are closely allied with the US and Israel, and in Syria, where they make up only 9% of the population, they have violently occupied several large Arab-majority cities as I stated in In Defense of Russia: Part 2.  There are at least 30 million Kurds across this region.

Iran itself is more diverse linguistically than most countries of the region, with only about half the population speaking Farsi as a native language.  There are many regional languages, but almost everyone speaks Farsi at least as a second language, as it is the language of schools, media, banks etc.

The second most common language is Azeri, the official language of Azerbaijan.  It is spoken by about 18% of the population.  Some linguists consider Azeri to be a dialect of Turkish and not a separate language.  Azeris are referred to as Turks in Iran.  About 10% of Iranians speak Kurdish.  The rest is mostly other Iranian languages.  Arabic is spoken by 2%, mostly along the Persian gulf.  Turkmen, closely related to Azeri and Turkish, is spoken by about .9% in the northeast of the country.

People must adhere to the official religion of Iran, Shia Islam, unless they are foreigners or were born into another faith.  But most Iranian people are less religious than Arabs.

And now for the Gulf monarchies.  Some of the small, oil-rich states on the gulf have many migrant workers and low citizen rates.  Most migrants come from South Asia.  In the UAE, Emirati citizens make up only 11.48% of the population.  Indians make up 27%, more than doubling the natives.  The picture is similar in Qatar, which has the highest GDP per capita in the world.  Qataris make up only 12.2% of their population, but if you’re lucky enough to be born a Qatari citizen, you’re life is a piece of cake.  They get free housing, health care, and a universal basic income.  Kuwaiti citizens make up 30% of their country.  Bahrain has slightly more citizens at 46%.

All gulf states are absolute monarchies, and all but Oman have Sunni royal families, but, interestingly, the Bahraini Arabs are majority Shia.  And as you would expect with a Shiite population it is much less conservative than the other gulf states.  Bahrainis can drink alcohol, wear skirts, and other such blasphemies.

Oman has about a 55% citizen rate.  It has a small population of around 4 million.  75% of Omanis adhere to the Abadi branch of Islam.  It is the only non-Sunni monarchy in the Middle East.  I didn’t know any of this of the top of my head.  Oman is a country you hear very little about.  But, I guess, in this part of the world, no news is good news, and Oman seems like a pretty peaceful place.

The citizen rate of Saudi Arabia is around 67%.  Religiously they are 85% Sunni and 15% Shia.  Most of Saudi Arabia’s oil reserves are in Shia areas, along the gulf coast and the border with Iraq, and, because of this, the Saudis are paranoid about Iranian influence, similar to Sadam.

Yemen is cursed with a lack of fossil fuels that is unusual for the Arabian Peninsula.  Subsequently, it is the poorest county in the Middle East.  It is about 53% Sunni and 45% Shia.  The Shiites live in the mountainous inland area around the capital, Sana, while the Sunnis are mostly clustered along the coast.  The Shiites currently control the government.  The Saudis, the US and Al Qaeda have formed a coalition to take back the capital.  The UAE is also involved, but their sphere of influence is in the northeast of the country.  The Shiites in Yemen have thier own Hezbollah-like militant group called the Houthis.  The Saudis are conducting siege warfare, a war crime, and are blockading the country, leading to starvation and disease.

There is also a tribal region of non-Arab Semitic people called the Modern South Arabians.  They have darker skin than most Arabs, and their languages are closer related to the languages of Ethiopia than to Arabic.  Collectively, they have a population of around 300,000.  Here is a map of these populations.

Many Westerners tend to lump Muslims into one group and overly simplify the Middle East.  It is actually a very diverse, fascinating, and, at least recently, tragic part of the world.  Every part of the world is mysterious and intriguing if you look into it closely with a non-judgmental open mind.  I hope I’ve taught someone something today.