There is a mostly carbon-based ‘black mat’ of sediment found across North America and Europe that can be carbon dated to the time of the Younger Dryas.  It is rich in iridium, an element uncommon on the Earth’s surface, but often found on asteroids and comets.  It also contains Clovis artifacts like fluted points.  This is what it looks like.

It has been observed as far afield as Syria. 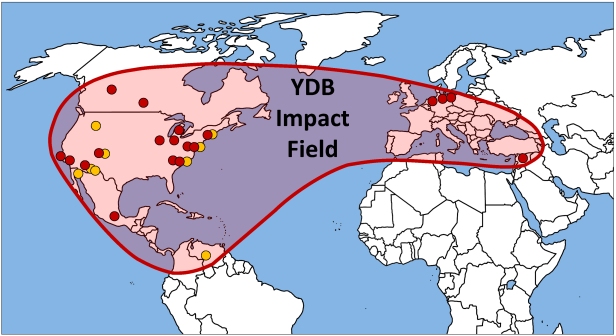 Besides iridium, nanodiamonds were also found.  These are tiny diamonds associated with asteroid impacts.  Unlike their larger cousins, regular diamonds, they can be formed quickly under extreme heat and pressure.  A lot of nanodiamonds in the Greenland ice sheet were able to be dated to around 13,000 years old.

At that time, almost all of current day Canada and much of the US was covered in a layer of ice 1 to 2 miles thick, so it’s not too surprising that there isn’t a crater.  In this theory, the asteroid would have hit the ice sheet, causing a massive explosion and melting much of the ice, leading to the instant 400-foot rise in sea level I mentioned in The Possibility of an Antediluvian Advanced Global Civilization.

The initial impact sent ice and pulverized bits of asteroid raining down on much of the northern hemisphere.  On the southern Atlantic coast of North America, where the soil is soft, there are a many perfectly round lakes known as ‘Carolina bays.’  These are widely accepted as crater lakes, but, because of the lack extraterrestrial rocks, are believed by many to be secondary-impact craters.  These could have been formed by large projectile ice boulders.

The Younger Dryas coincided with the end of the Clovis Culture and the extinction of 75% of the megafauna in North America.  This extinction, known as the late Pleistocene extinction, affected all continents but hit North America the hardest.  Woolly Mammoths in present day Russia were even found to be flash frozen, some even standing in place with food in their mouths.  Other animals met violent ends just before freezing, including having their legs broken.  Overall, the northern hemisphere was affected much more than the southern.

In 1922, a geologist from the University of Chicago named J Harlen Bretz hypothesized that much of North America was shaped by catastrophic floods in the distant past.  His theory was initially rejected, as he focused only on the evidence for floods and proposed no supposition as to where the water might have come from.  But his theory has gradually become more and more accepted over time.  Here is a short documentary by Randal Carlson on some of the evidence for a great North American flood.  I’m not going to go over all the evidence myself because my understanding is too limited.

This massive influx of water into the oceans combined with the debris in the atmosphere plunged the planet into a mini ace age that lasted more than 1,000 years.  Temperatures can be pretty accurately measured by analyzing ice core samples from Greenland and Antarctica.  Here’s a graph from a study done in Greenland showing average temperatures going back to 15,000 BC.

Both of these theories are far from universal acceptance, but scientists are now allowed to discuss then without being ridiculed too much by their dogmatic colleagues.

Taken on its own, this is not the most intriguing information I’ve ever seen, but when you look at it alongside the paradigm-shattering  recent archeological discoveries, it is very compelling indeed.  You can really see the history of our planet being rewritten.

We are living in very interesting times.  Will the old paradigms be able to hold together amidst the incoming new data from independent researchers?  And will the universities and scientific journals who are the arbiters of official information double down and become more authoritarian, or will they be forced to open their minds and relinquish their monopoly?

One thought on “Evidence for the Younger Dryas Impact”