The Democratic party establishment would rather lose to Trump than win with a populist like Bernie or Tulsi Gabbard; that may sound ridiculous to most casual consumers of mainstream media, but party loyalty is mostly a means of controlling the peasant masses.  For establishment politicians, their loyalty is to their donors, not their team. 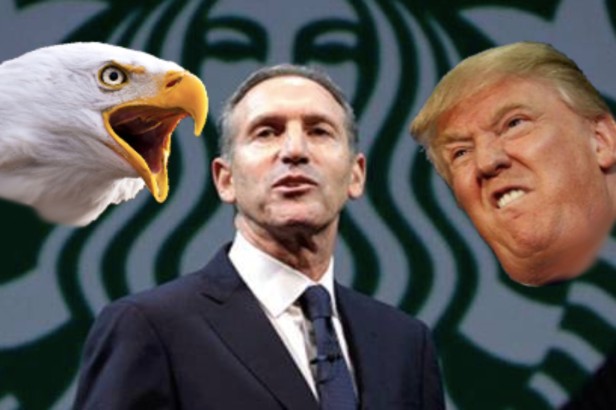 The establishment is in a bit of a pickle.  There is a rabble of unwashed peasants who are stubbornly insisting that their elected representatives represent them.  In 2016, they actually refused to support the Democrats’ anointed queen, Hillary Clinton; it got so bad that they had to rig their primary.  There may come a time in the next election cycle when it becomes impossible for them to get their pre-approved Wall Street puppet (probably Kamala Harris) through to the general election.  A populist like Bernie or Tulsi might go up against Trump, in which case they would destroy him in humiliating fashion.  The Democrats may be put into a nightmare situation: one in which their base expects to be represented and their donors won’t get a return on their investments.  What ever will the Democrats do?

Enter Howard Schultz.  The Starbucks CEO has announced he his running as an independent. He assures us that he is not a Democrat; he just coincidentally agrees with the Democratic establishment on everything.  If the Democrats slip up and find themselves in a situation where they could win and have to represent the people, I expect CNN, MSNBC, and The New York Times to throw their support behind Schultz.  I don’t think they believe that Schultz can actually win, but, like I said, they would rather lose to Trump than win with a populist.  A strong Schultz campaign with MSM backing could lead to the so-called ‘liberal’ vote being split and Trump getting another four years.  This is, of course, assuming that Trump doesn’t suddenly drop dead of a heart attack, as over-weight men in their 70s who snort Adderall everyday are known to do.

CNN has already given Schultz his own town hall.  You can watch it here if you have a high tolerance for corporate bullshit.  The only Democratic candidate they have given this PR gift to is Kamala Harris.  In Schultz’s town hall, he hammers down the illogical and thoroughly debunked talking point that Medicare for All would be more expensive than the current system and would put the country in dept.  In a case of gross journalistic malpractice, the CNN host did not correct him.  The crowd also didn’t boo, indicating that they are embarrassingly ignorant and/ or carefully chosen by CNN.

Schultz has received exponentially more press coverage than most Democratic candidates.  He has been making the rounds on all the major news networks, but it hasn’t paid off for him.  He has a base of absolutely no one.  Who would vote for a centrist?  No one.  Everyone despises centrists.  The more ‘moderate’ members of both parties are already virtually indistinguishable.  I use the word ‘moderate’ in quotations because there is nothing moderate about committing genocide in Yemen.  So-called ‘moderates’ are radicals.  Most independents are to the left of the Democratic party, although there are also growing contingents of independents that are white nationalist or anarcho-capitalists and are to the right of the Republican party.  Almost no independents are centrists.  The establishment could have pushed a left-wing independent on us, but he or she would run the risk of winning, so they are running a man with a 4% approval rating.  They will really need to crank up the propaganda to brave new levels to make this guy likable.

If the establishment is again successful in crushing the will of the people by rigging the primary and getting their candidate through to the general, I suspect Schultz will drop out of the race.  His services will no longer be needed.

It is endlessly fascinating to see the lengths they will go to to maintain their grip on power, but I can still sense it slipping away; they are slowly but surely losing control of the narrative.  Schultz’s laughably low approval rating is testament to that.