Moscow watched as the US used Russiagate as an excuse to censor and discredit dissident voices.  They must have thought is was an inspiring tactic because they’re giving it a try themselves.  In a display of global symmetry, Russia is using the threat of the US cutting them off from the internet to create their own China-esque fire wall.  They’re calling it a move towards “internet sovereignty.” They claim to expect social media sites to block themselves from users in Russia- where, ironically, the likes of Mark Zuckerberg and Jack Dorsey are accurately recognized as government-connected oligarchs.  Some fear that in an effort to ‘protect’ its citizens from unfair social media bannings, Russia will ban them from social media and create its own sites that can be better regulated and censored.  Moscow is no-doubt worried about their total lack of control over sites like Facebook, Twitter, and YouTube.

Moscow is mostly pointing to last year’s Visa and MasterCard sanctions as evidence of American corporate sabotage of their country.  I wouldn’t say it isn’t a genuine crisis, but as Rahm Emanuel taught us: “Never let a good crisis go to waste.”

I sometimes try to defend Russia against the more ridiculous propaganda coming out of the West, but I can’t have your back on this one, Russia.

This goes to show things are the same all over the world.  Never underestimate the power of using the fear of an outside force to trick people into giving up their freedoms.  In America, we have a more sophisticated divide-and-conquer propaganda system where Republicans are made to fear Muslims and Mexicans while Democrats are told that they should be terrified of Russia.  Russian propaganda seems to be more monolithic, but the overall tactics are similar: “This place would be a utopia if it wasn’t for those foreigners.  But don’t worry, we’ll protect you.”

On a lighter note, two North African countries, Algeria and Sudan, have successfully pulled off peaceful, democratic revolutions.  Both countries have entrenched deep states- military in the case of Sudan and civilian in Algeria- and substantive reforms are far from a foregone conclusion, but removing heads of government is nothing to be ignored, especially when those heads of government have been in office for decades. 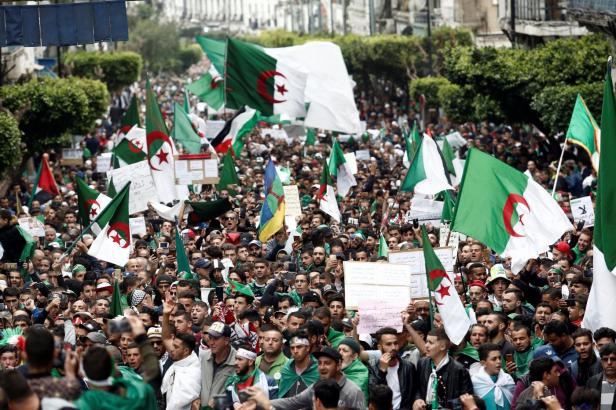 The old guards are predictably being bolstered by the Saudi and Emerati monarchies.  Regardless of their business ties with those countries, which I’m sure are substantial, democracy in the Arab world is a Gulf manarch’s worst nightmare.  This alone should be reason enough for any caring person to cheer these revolutions on.

For me, the most interesting thing about this is that both countries are in the Arab league.  It will be difficult for the likes of Egypt and Saudi Arabia to prevent this pro-democracy rhetoric from infecting the minds their own pleasantries.  In the 21st century, change in the Arab world tends to come from North Africa.  2011’s Arab Spring started in Tunisia.

It’s already spreading in the region.  Massive protests have broken out in the Moroccan capital of Rabat, where the government has been making incremental reforms to weaken the authority of the monarchy, but apparently not fast enough.  Could it be possible to see a free Western Sahara in our lifetimes?  In Libya, one of the three ruling factions has broken the stalemate by making a move on Tripoli.

The US and UK pretended to want to bring democracy to Iraq, but I doubt what is happening this week is what they had in mind.  The Iraqi Parliament is expected to vote to evict the US military this weekend.  They’ve made it clear that they don’t want their country to be the staging ground for an illegal invasion of Iran.  President Trump says we need to prolong the $7 trillion occupation of Iraq to “keep an eye on Iran.” I wonder if he’s lying to us like usual or if John Bolton and company convinced him that reconnaissance in the age of satellites is done by binocular.

Of course, the will of the Iraqi Parliament counts for little in the eyes of the Pentagon.  The occupation would merely go from legal to illegal.  The Pentagon would probably lose some of their allies and interpreters on the ground.  It remains to be seen whether or not they’ll be allowed to continue using local infrastructure for transportation and supplies.

Anyways, it pretty well overturns America’s democracy-and-freedom propaganda from the run-up to the invasion.  But I guess most Americans are so desensitized to endless war at this point that justifications rarely cross their minds.