The idea of the American Right being pro-free speech is a talking point that needs to be put to rest once and for all.

This talking point is very strong on YouTube and the right-wing college speaking circuit.  It’s advanced by Ben Shapiro, Dave Ruben, and even echoed by Fox News pundits like Tucker Carlson and in the opinion sections of major newspapers.  It usually goes something like this: “The Left has completely taken over higher education, and now college campuses are bubbles where contrary opinions are not tolerated.  This is what will happen nationwide if the Democrats get into power.”  Sometimes they also focus on the social media deplatformings of people like Alex Jones or Milo Yiannopoulos.

Intolerance for free speech is a problem on the Left, but an overblown one.  Almost as many left-wing speakers get deplatformed or uninvited from colleges and universities as right-wingers.  The most silenced demographic of speakers in the country are pro-Palestine activists.

Overall, college campuses are not friendly towards free speech nowadays, but it’s a problem on both sides of the isle, and this is harmful to the body politic.  But colleges are not in any direct position to affect law, and they don’t have nearly as much cultural influence as reactionaries make them out to have.

Perhaps more worrying than the anti-free speech college movements is social media censorship.  ALL anti-establishment views are no longer tolerated on Facebook, Twitter, or YouTube.  I’m personally banned from Twitter for challenging the establishment narratives on Syria and Yemen, and I’m pretty sure I’m not a right-winger.  ALL independent political commentary on YouTube is now demonetized.  It makes no difference whether it’s left of right.  This is because old media doesn’t want any competition, but also to better control narrative management.  Facebook partners with The Atlantic Council, on whose board people like Henry Kissinger sit; this is who gets to decide what information is OK for posting.

But as the law currently stands, the first amendment refers to government laws, not to the rules and regulations of private industries. (Although it does get a bit more murky when we’re talking about the quasi-private entities of public universities.)

I can only think of two true, unquestionable violations of the free-speech clause of the first amendment going on right now in America, and they are both originating deep in the halls of the Republican Party.  They are the Anti-BDS laws passed in 27 states and the US Senate , and also the prosecution of Julian Assange by Trump’s Justice Department.  But, of course, the aforementioned free-speech warriors on the Right are completely silent on these unconstitutional abuses of power. 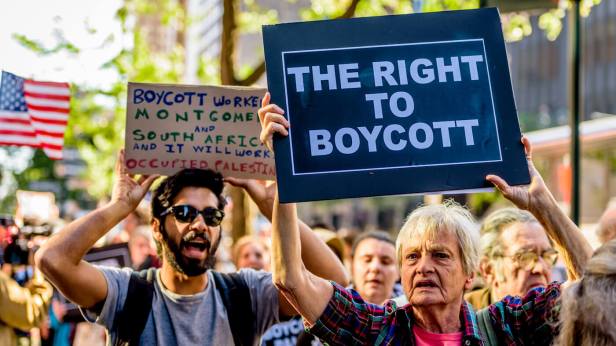 I know the mainstream media says it is antisemitic to acknowledge the indisputable fact that the Israeli lobby donates to US politicians.  So go ahead and call me a Nazi.  I have allegiance only to the truth, so here goes: the Israeli lobby is really getting a return on their investment when it comes to the Republican Party; they bribe both parties, but the Democrats have been dragging their feet a bit lately, whereas the Republicans are completely devoted to their customers and don’t give a damn about their constituents.

In most US states it is now illegal for government workers, contractors, or anyone receiving government benefits to boycott Israel.  It’s perfectly legal to boycott a US state, as many people are doing right now with Georgia, Alabama and other anti-abortion states, but it’s somehow not OK to boycott this foreign country that donates massively to our elected leaders.  Really let the absurdity of that sink in.  Take a look at this court case that is currently going on in my home state of Arkansas.

The biggest threat to free speech and press freedom in my lifetime is the prosecution of Julian Assange.  As of this week, he is being charged under the Espionage Act for publishing embarrassing information on our government.  This act is known for being used to go after whistle blowers, but has never before been used to prosecute a publisher for engaging in journalism.  This is a dark new road we are going down, and it’s right-wing neocons in the driver’s seat.

I hate to engage in this right-verse-left nonsense.  In the context of US politics it’s mostly just a divide-and-conquer scheme to get the peasants fighting amongst each other instead of the standing up to the corrupt ruling class.  But when I see a narrative being pushed that is so illogical and nonsensical, I can’t just sit back and keep my mouth shut.