One of the more absurd talking points to be trending in right-wing media circles is that America- and specifically the Democratic Party- has taken a hard turn to the left in recent years.  In fact, the exact opposite is true.  The Democrats of today are basically indistinguishable from the Republicans of 30 years ago, and the Republicans are wandering into uncharted territory.

The Democrats are now so subservient to corporations, it’s now incorrect to call then left at all.  The switch took place in the early 1990s in what is known as the Third Way Movement.  The Republicans had occupied the White House for 12 years.  One reason they were so successful is that they had out-fundraised their opponents in every presidential election for decades and could pay for an effective, streamlined marketing strategy.  The Republicans were able to do this by accepting bribes from every corporation that was willing to pay up.  Meanwhile, the Democrats were still largely funded by labor unions with much shallower pockets.  However, in ’92 Clinton changed the game and outspent the Republicans; by ’96 the Democrats were almost doubling the Republicans’ campaign spending.  This is a trend that was repeated by the Obama and Hillary campaigns, although by now, campaign spending is on a whole new level. 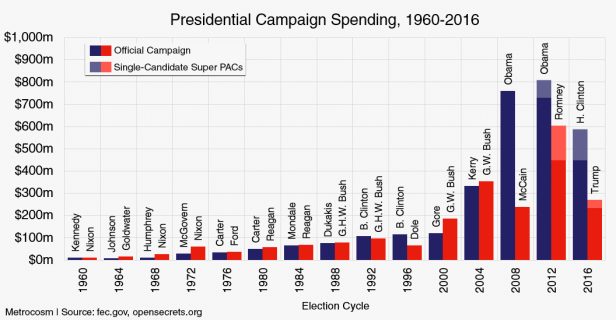 Obama admitted that he was “so mainstream” he’d be considered a moderate Republican in the 1980s.  I would even go as far as to remove the word moderate. There is absolutely nothing leftist or socialist about Obama, unless you’re dumb enough to consider forcing people to buy exorbitantly expensive insurance from corporations socialism.  If Republicans really cared about what they pretended to care about, they would love him.  He lowered the deficit to a third of what it was under Bush, he eliminated hundreds of thousands of public sector jobs and added more than 12 million private sector jobs, and he implemented the right-wing Heritage Foundation’s healthcare plan.  He’s the best Republican president  anyone could ask for.

As he admitted, the similarities between himself and 1980s Republicans is uncanny.  This is breathtakingly ironic since Fox has designated Reagan as the patron saint of the Republican Party and Obama as the Antichrist.  If you listed the two presidents’ policies side-by-side and redacted their names it would be difficult to tell whose is whose.  Republicans- without any hint of irony or hypocrisy- actually viciously condemn Obama for supposedly making secret deals with Iran.  History is not a strong subject for them.

Bernie Sanders is considered a radical by many uninformed Americans. “He’s a socialist who’s going to destroy the country and turn it into Venezuela,” they say.  Actually, he’s just a Social Democrat, an ideology that was mainstream in America until a few decades ago and is still very popular throughout most of the developed world.  The last Social Democrat to be elected US president was FDR, who was so popular that the American people elected him until he died, and the corrupt establishment had to enact term limits to prevent another people-serving administration from indefinitely occupying the White House.  FDR is consistently rated one of the best presidents in US history.  Fast forward 70 years from his lifetime, and his ideology is called ‘radical socialism’ by right-wing propagandists.  The Green New Deal, which  Bernie is a proponent of, is directly inspired by FDR’s New Deal, which is almost universally agreed to have been a smashing success.

Most of the policies that Bernie advocates for have already been implemented across much of the developed world and are hugely popular in most other countries.  There is not one single country in the world that has a popular movement to give up their nationalized healthcare systems to adopt America’s for-profit insurance system.  On the international political spectrum, Bernie is considered a milquetoast center-left politician.

Hillary Clinton, who the Right delusionally calls left-wing, said that Medicare for All is a “hypothetical system that will never come to pass.” This underscores the America-centric worldview that poisons out political dialogue.  If we redefined hypothetical as achieved in every other developed country then her statement would almost be correct.

Right-wing politicians in Europe would not dare come out against single-payer healthcare; it would be political suicide.  For me, whether or not you are in favor of single-payer healthcare is a litmus test: if you don’t support it, you’re not a lefty.  And almost the entirety of the Democratic Party- from Polosi to Biden- don’t support it.  Some people like Kamala Harris and Elizabeth Warren pretend to, but when you ask them to be specific, it quickly becomes clear that they support some kind of half measure.

I’ve written several times about how the establishment Dems are now neocons.  This is not exactly a left-wing position.  It underscores their subservience to defense contractors and Israel and a total lack of regard for the well-being of the electorate.  The Democrats are actually more in favor of increasing military spending than the Republicans are.  Offense already accounts for more than 50% of the country’s discretionary budget.  But apparently that’s not enough. “We need to take more money from schools, infrastructure and social programs and feed it to the imperial machine,”said no lefty ever.

There isn’t much air between the two parties on economic policy.  It is standard right-wing dogma in America that Obama raised everyone’s taxes.  In reality, that’s just propaganda.  If people’s taxes had gone up under the Obama Administration, they would have had Bush to thank for that, because the Bush Tax Cuts were set to expire; but, instead, Obama made most of them permanent in 2010.  Obama also bailed out the banks after the 2008 recession, and refused to prosecute any bankers for fraudulent loans or derivatives.  That’s not a very socialist position to take. “That’s all in the past; we need to look forward,” he said.  It almost makes sense if you don’t think about it.  Every crime ever prosecuted was in the past.

Trump did cut taxes even more, causing the deficit to explode, but, as I alluded to earlier, the Republicans are pretty much off the spectrum now.

Joe Biden- a presidential candidate and Republican in every sense but party affiliation- has repeatedly called for cutting Social Security and Medicare, two of the last vestiges of leftism we have left in America.  He too is laughably called left by right-wing propagandists.  We don’t even need to get into his segregationist history.

I’ve noticed another pretty slick lie being peddles on Fox and other right-wing propaganda outlets.  They’re pointing to actual left-leaning people like AOC, Ilhan Omar and others and pretending that they are representative of the average Democrat, even though the mainstream of the party is basically now in open war with them.  Nancy Pelosi snipes at them with way more ire than she ever directs at her colleagues across the isle.

The Democrats’ main strategy now is to be progressive on social issues, which they blow out of proportion to give people the impression that they are the antidote to Republicans.  Their propaganda arm, MSNBC, has been pretty effective in hammering their viewers on cultural issues.  If you turned to MSNBC now you would probably see them talking about either cultural issues, the personalities of politicians or Russia; you certainly wouldn’t catch them advocating for left-wing policies.  This is why I half-jokingly say “Democrats are Republicans who don’t hate gay people.” They are allowed to take populist stances on cultural issues because their corporate donors are not affected by social policy.

So if you’re on the right and you think the county is being taken over by leftists, please turn of the TV; it’s making you real stupid.  Get a hobby or a research interest or something.